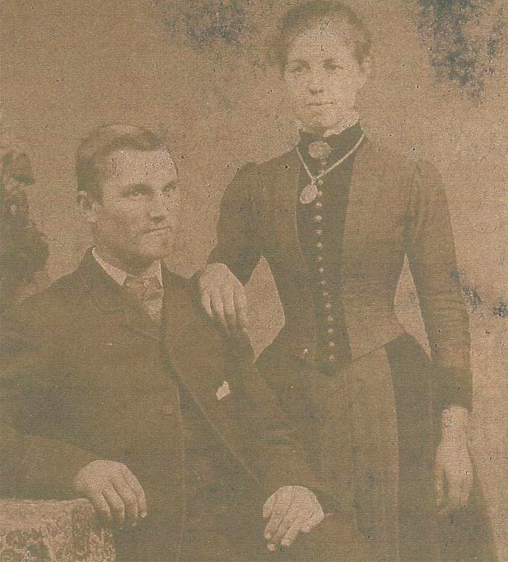 When I first started researching my family on my mother’s side, I was lucky enough to have a look through my Nan and granddads family documents which included certificates, letters and photos. I came across a small family tree of the Barnard
family who were my Nan’s family name. Over a period of time I researched and added people to this small family tree and took the tree back to my sixth great grandmother Sarah Barnard, who was one of six children to Henry Barnard and Sarah Searle. They all came from a small place called Haslingfield in Cambridgeshire. I decided to put it this information on the website genes reunited. It was about a month later I had a connection with a lady on the website from Australia. Her sixth great grandfather was Joseph Barnard the sibling of my Sarah Barnard. Over the past year or so we have exchanged so much information on the family and sent photos and information. Joseph Barnard immigrated to Australia at the age of 21 on the Voyage from England to Portland Bay, Australia on the board the ship ‘Constant’. He went with his wife Elizabeth, her mother (also called Elizabeth) and Elizabeth’s two sisters Ann and Sarah Ann. According to the shipping log Joseph was an agricultural laborer who could read only. His religion was Church of England and Elizabeth was listed as 19 years old and could read and write.
There were 191 adults on board. This was to be the last Voyage for the Constant as it got severely damaged in the port and never sailed again. “Liverpool is a northern port about 175 miles from Haslingfield – no small distance in the 1850’s. They well may have traveled by train to Liverpool as the Cambridge railway station opened in 1845; the alternative would have been a horse-drawn coach. Either way it would have been quite a journey in itself. Quite a few people immigrated to Australia from Haslingfield and surrounding areas in the 1850’s as the prospects for the agricultural communities were poor. The lot of the ordinary family had also been made worse by the Enclosures, where small – holders, who had scraped a living from their own small plots of land, lost these rights to the large landowners who were given the right to consolidate these small plots into their own large farms.

This was done in the name of creating modern efficient farms; a side effect was to reduce many small- holders to the status of
farm laborers. Many people left the agricultural communities for work in the growing industrial cities, others looked further a field
for a solution. Ironically, coprolite was discovered in the area later in the 1850’s and there was quite a mining boom in the south
Cambridgeshire villages for about 25 years. This probably explains why emigration to Australia did not continue from here into the 1860’s. ” My cousin kindly sent me a whole document of a diary of another passenger who was also on that voyage with Joseph.
‘THE VOYAGE FROM SOUTHAMPTON ENGLAND TO PORTLAND BAY AUSTRALIA ON BOARD THE ‘CONSTANT’.

Diary 1854-1855
NOVEMBER 6th Monday we went on board the ship ‘Constant’ bound for Portland Bay from Southampton.
NOVEMBER 8th We set sail the wind lay well for us. It soon took us through the needles and soon brought us in site of the Isle of Wight. In about two days brought us out of the English Channel but we had a very rough sea and the greatest part of the
immigrants were sea sick and lay about the deck

NOVEMBER 12th We crossed the pin sands the sea was very calm. The people got about all right again. Then the Bay of
Biscay. Then the next coast and the Atlantic sea. A child was born.
NOVEMBER 14th we had three or four very rough days, upset about all the men and women and children. We could not keep
anything on the tables nor on the shelves. We were obliged to sit on the floor to hold our pots and plates.
NOVEMBER 17th we now see what is called Madeira very high mountains far above the clouds.

NOVEMBER 18th we pass another two more very high mountains far above the clouds. Of them is the Islas Canarias
where foreign wines (?) are made.
NOVEMBER 19th we have 12 hour days
NOVEMBER 20th we passed another large island called Tenerife and 2 more islands higher than the clouds
NOVEMBER 21st we saw a very large fish called a blackfish (?). I
saw it myself from 5 to 6 roads long and 3 yards deep. We saw plenty porpoises or dolphin.
NOVEMBER 30th We have 14 hour days. The sun is very hot. We passed another island called Lambarene (?). It is a very high
mountain far above the clouds.

I am passionate about family history and history in general. Feel free to read my articles and if you are starting out, have hit a brick wall, looking at a particular type of record or need any advice please feel free to contact.
info@familypast.co.uk
Previous post How common was Bigamy?