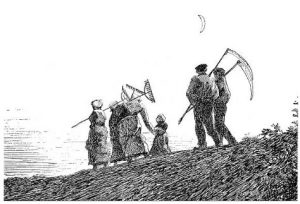 Firstly sorry I have not been able to post in a while due to trying to complete my lectures for my coursework and being a mother of two small children who demand a lot of my attention. Anyway genealogy and history are the two places I go when I have five minutes to myself.

The one thing that strikes me as giving a real insight to the lives of our ancestors are their occupations. A lot can be learnt from our ancestors old trades which can give us an indication of the wealth and different lifestyles they led. In comparison to our modern world a lot of those old trades ceased to exist anymore, so it’s hard to understand what was involved with some of them. Trades were also handed down in many families and many businesses were father and sons. There were also different locations which were associated with certain trades, for instance, High Wycombe in Buckinghamshire was a popular location for the furniture trade which included french polishers and chair makers. The Windsor Chair made it’s first appearance there. If perhaps you stumble upon ancestors living in that area then there is a high chance that their trade was involved with making furniture. Then there was less heard of occupations such as a ‘Coprolite Digger’ which was a rare trade, but was found often on the census returns on the boundaries of Hertfordshire, Cambridgeshire and Bedfordshire between the period of 1860 to 1890. The trade involved mining of coprolites (phosphatic nodules) which was known locally as ‘dinosaur’s dung’. The coprolites found in the ground were proved to be very effective fertiliser. However the trade was very intensive and dangerous with the mining of huge trenches. This trade declined after 1890.

The Industrial Revolution brought the trade the “Knocker Up” which involved someone knocking on peoples doors early hours to get them up for work. The knocker up would use large sticks and batons to wake the sleepers making sure they would make work on time. The knocker up would get a few pence a week for this. Taken from the Newspaper Archives an article (Huddersfield Daily Examiner published on 10th February 1892) regarding a man rather woken up rudely by a knocker upper.
“The supposed man with the peashooter practised the little known industry of the “knocker up” and roused people at any time they liked by rattling wires, fastened to a long stick, against their window panes; and , not being then accustomed to the new houses, he woke up the wrong man.” If this strange profession was not your ancestors thing then maybe they were a “Hush Shop Keeper” which was someone who sold unlicensed ale and beer which they most likely brewed themselves.

Some trades such as a ‘painter’ on the census can be confusing as initially a painter can be seen as an artist or it can be seen as someone who is a house decorator. In fact a lot of ‘painters’ on the census were in fact wall paper hangers. Which was a very popular trend for interior of peoples houses during Victorian times. A lot of the wallpapers contained lead and arsenic which they used for the dyes which were mostly green. This caused many fatal health problems for people, by the 1870’s lots of wallpaper firms were advertising arsenic free wallpaper.

Other common trades such as ‘farmer’ for example, have a number of job roles which involve working on and around a farm. A ‘ Bondager’ refers to a woman who works on a farm. Agricultural labourers are commonly found in rural areas where there are farming and fields. However one of the worse trades when you look through history has to be a ‘leech collector’. Doctors used leeches for treating all kinds of ailments and illnesses where they drained blood of the patient which they believed would help them retain good health. This may work for some conditions however they would used this treatment for headaches. Anyway some poor folk had to collect the bloodsucking creatures from the dirty water from marshes and ponds. The leech collector’s role was very poorly paid and in many ways very dangerous. No wonder these poor people suffered themselves with blood loss and falling ill in collecting the little bloodsuckers that spread diseases.