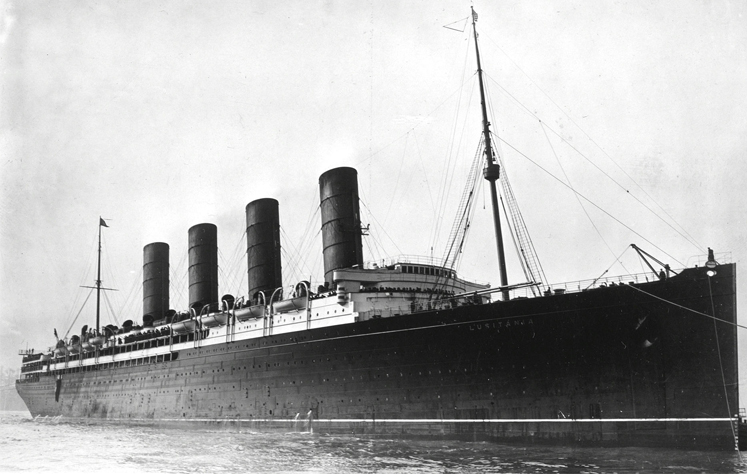 The RMS Lusitania was a fine ship that came to tragic ending just three years after the sinking of the Titanic
on 7th May 1915, when it was torpedoed by a German Submarine during the First World War. The sinking of
this ship was said to be why the American’s got involved in the war because of the amount of lives lost. The Lusitania was built by John Brown and company of Clydebank, Scotland. It was named after the ancient roman province which today we know as
Portugal. On the ships last voyage there was a total of 1,959 people and out of this number 1,198 passengers lost their lives on the Lusitania. The sinking of the Lusitania effected many peoples lives.

Maud Adams was a famous stage actress of her day and was best known for her appearances on Broadway in Peter Pan and What Every Woman Knows, she was born on the 11th November 1872 in Salt Lake City, Utah. Her career as an actress really took off when the powerful and successful producer Charles Frohman took control of her career. He became a important part of her life and as her stage performances became more of and Charles was at the height of his career, controlling six theatre’s in
New York, more than two hundred throughout the rest of the United States, and five in London. This all came to a disastrous ending, when Charles Frohman became one of the many passengers on the Lusitania who lost his life. Frohman was said by survivors that he declined a seat that was offered to him on a life boat and saying “Why fear death? It is the greatest adventure in life” a quote from his one of his most famous plays Peter Pan. After his death Maud Adams ended her stage career with a reclusive life style and never married. It was rumoured that her and Charles may of been secretly engaged. This could have been a reason why Maud Adams mysteriously gave up on everything. Many years later in 1975 Richard Matheson wrote a book ‘Bid Time Return’ which became the 1980’s adaptation film “Somewhere In Time” starring Christopher Reeve and Jane Seymour.
Jane Seymour’s character Elise McKenna is based on Maud Adams. In the film “Finding Neverland” (starring Johnny
Depp and Kate Winslet) Dustin Hoffman plays the famous Charles Frohman and the film uses the Pan theme throughout the film and the play that Maud Adams once was part of.

During my research of the Lusitania and the people affected my dad had a result with one of our ancestors that also sadly lost his life on the ship. William Alfred Horncastle born in 1878 Bethnal Green, London. Died on the Lusitania aged 37 years old. William’s wife was pregnant at the time and when the baby was born (after her father’s death) the baby was named after the ship “Lusitania”.

Previous post The Victorians and How They Changed Britain