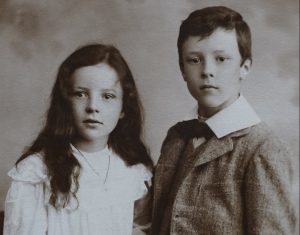 The School Records – many of these children went to fight in the great war.

School became compulsory from 1880 when the Elementary Education Act came in for children aged 5 – 10 to attend school.  The Act was an extension of the 1870 Act which is otherwise known as Fosters Education Act. It’s aim was to make school compulsory to all children unless they were ill or lived more than three miles away. Before the Acts came in many families, especially families from the poorer community felt it was more beneficial to send their children out to work to bring a wage than an education.

Further Legislation came in 1893 extending the compulsory age to 11 and in 1899 it was further extended to the age of 12. It had huge impacts on some families and some children had to work out of school hours just to make ends meet. Truancy also reflected children’s poor attendance and likelihood was they were trying to work to bring food to the table. If you get a chance to look and read the Log books for different areas it was an overall problem and many teachers record their frustration of attendance.

Another huge battle schools faced was disease and sickness. Unfortunately schools were a breeding ground for them along with many other factors this was due to lack of hygiene and poor sanitation. We take for granted today that our children are vaccinated against many things such as the dreaded measles, mumps and rubella. These ghastly illnesses lingered around schools and worse of all when one case was confirmed the likelihood was that many children went down with it.

Outbreaks of Scarlet Fever, Diphtheria, Hooping Cough, Small pox and many other diseases sometimes forced school closures from time to time. These diseases took the lives of many young children and you were really lucky if you made adulthood. Charles Darwin lost his beloved child Anne age 10 due to Scarlett Fever and in his personal memoir he recorded

“We have lost the joy of the household, and the solace of our old age…. Oh that she could now know how deeply, how tenderly we do still & and shall ever love her dear joyous face.”

Patrick Bronte, the father of the famous Bronte sisters Charlotte, Emily and Anne buried his first two daughters Maria and Elizabeth at such young ages of 10 and 11 due to Tuberculosis they caught from school. In the same year a Typhoid epidemic hit the school and the year previously Maria and Elizabeth had contracted measles and whooping cough. Cowan Bridge School was a boarding school for girls which inspired Charlotte to write Jane Eyre from her experiences and time at the school. Patrick withdraw his other children from the school after the death of his eldest two as he feared the others would follow the same fate.

The school records can be found for London on Ancestry.  Last year findmypast.co.uk released the National School Registers which covers the years of 1870 -1914 for England and Wales and these can be so interesting to research.